It was the first day of half term and the second day of the clocks going back, so you would think 7.30am would see me snuggled in bed, maybe a cup of tea and a good book?

Being a Cub Leader at 2nd Bracknell meant I was at the train station with my clip board waiting for 32 Cubs and 6 Leaders. We had arranged to visit Sky Academy where we were going to go behind the scenes at Sky and make our own TV news report.

So why would we take Cubs to Sky?  Sky Academy asks the Cubs to: be creative;  communicate effectively; solve problems; manage time carefully and practice teamwork. The skills we try and encourage in the week to week meetings.

The Cubs were really well behaved on the busy commuter train, during a quick change at Virginia Water and on to Syon Lane. We arrived and were led into the Sky studios, four floors, 100m by 45m each floor the size of a football pitch.

We saw life size models of the Simpsons, Sulley and Mike,  studios with very expensive cameras and we met people who worked on the ‘sharing’ floor, this is where the Sky programmes get sent to the satellites and people’s homes.   We saw Sky News being presented live on air. We then went to the ‘making’ floor and the Cubs put into practice what they had learnt in their own studios.

With a theme of ‘Taking care of our world’, Reporters reported, Editors edited, Producers produced, Script writers wrote, Witnesses and Experts were interviewed, Directors pulled it all together and the camera operators caught it all on camera.  Each Cub should have a USB wristband with their News report on it.  If not please e mail rama@2ndbracknell.org.uk

The Cubs were perfectly behaved and you never know may have been inspired to pursue a career in television. 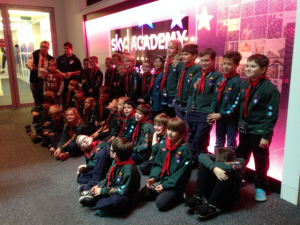