On Saturday 15 June, Steve Prower and a party of Cubs took Barry’s Bus over to Nowhurst Camp Site near Horsham to make a surprise visit to 1st Billingshurst’s camp. The groups have a link because Nick Layt who is now assistant Cub Leader of Billingshurst’s Parbrook pack was previously the Cub leader at 2nd Bracknell.

However, this visit was not just a social one as we had nominated Nick for a special award. 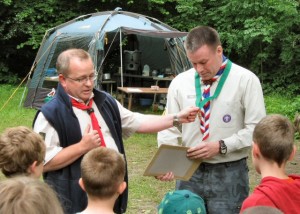 Steve Prower, Group Scout Leader at 2nd Bracknell said “Nick has been a 2nd Bracknell leader on and off since 1985 and despite moving to Sussex in 2006 has continued the relationship with us, not least by continuing to manage our website. We thought that was worth celebrating and so I’m delighted to be able to present him with the Award of Merit”.

Karen Brooks, Cub Leader of 1st Billingshurst’s Parbrook Cubs said “Like many other camps, Nick has planned this one for us. It has been very hard to weave in the 2nd Bracknell involvement without him finding out but he really had no idea this was coming. I’ve run Cubs with him since 2006 and this award is well deserved. We’ve certainly benefited from the ideas he brought with him and it is great to do joint activities with the Bracknell Cubs and leaders.”

Nick Layt said “It has been quite a day. People kept turning up and I had no idea why but it is lovely to receive the award. When I first joined 2nd Bracknell in 1985, the inspirational Barry Smith was Akela. He was an amazing man and his legacy is all of us that are still involved in Scouting. I can’t think of anybody else at 2nd Bracknell who has received this award since I have been involved so that makes me feel really special.”

Following the award presentation the Cubs and supporters from both groups were able to enjoy a celebration lunch including a specially decorated cake made by Sue Laws, a Parbrook cub parent. The two packs then spent the rest of the day together at camp until the Bracknell party departed after a camp fire.

For more photos from the day please see our Award of Merit photo gallery.
Those who follow @2ndbracknell on Twitter were kept up to date with tweets from the campsite:

Photos of Nick in action at 2nd Bracknell